Falling off a perch is not a pleasant feeling for an individual or a company.

However, falling is a trait among warriors, and rising after a fall is a hobby for champions.

For this to happen, an individual or a company needs to be sitting right up to the pile of all other competitors for several years to lose track and fall so hard that the company usually ends up in a bankruptcy file.

I love bookstores, and visiting Borders at its time was like exploring an Alibaba cavern to discover some unknown treasures.

It’s great to feel, touch, and examine the newest book.

When I buy a book online, I already know what I am looking for. However, when I visit a book store, the task is different. It is an exploration, something unexpected could happen.

The Borders Group was a large book and retail music corporation with stores in the United States, Canada, and the United Kingdom.

The first Borders store opened in Ann Arbor, Michigan, in 1971.

It had a website as well, in addition to its retail outlets.

It also published books under its name and various imprints. But their story ended on February 16th, 2011, when the firm filed for bankruptcy.

As we have seen for companies such as Toys “R” Us and Blockbuster, Borders could not anticipate the disruption, which grew into a snowball that swallowed up all of their business.

Borders were one of the first book megastores, along with competitor Barnes & Noble.

Borders’ early popularity was based on its size and for providing a vast number of books — tens of thousands, in some cases — when most bookstores could only afford to stock a fraction of that.

But Borders lost its edge.

Barnes & Noble, on the other hand, invested in enhancing its online sales. As a result, it eventually produced its e-reader, the Nook.

It then expanded its physical facility, refurbished its stores, and outsourced its e-commerce sales function to Amazon.

How on earth did that happen?

“Our online investment will be channeled to support our in-store platform, while Borders.com will continue to be a convenience retail channel. We have targeted loss reduction as a major goal in this area,” as described in Border’s 2000 annual report.

While looking into the unsettling disruption framework, we identify external and internal elements that make disruption happen and how they were outlined by their strategic focus on brick and mortar expansion.

“The book, music, and video buying experience we deliver is compelling. Retail convergence, our unique and highly effective merger of selling channels, has momentum. Our plan for 2001 is aggressive. Many initiatives launched in 2000 produced positive results that we will continue to leverage for greater growth. “ Borders described in 2001.

So there you have it — how we can unfold seven surprising lessons from how Borders Group failed to unsettle disruption. 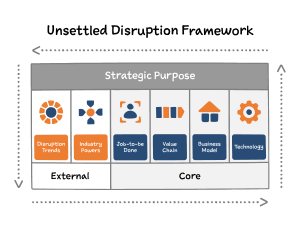 Internet, eCommerce, and e-books quickly became as popular as their paper counterparts, previously neglected by Borders.

As a result, a movement towards book digitalization was ignored.

In November 2007, The Amazon Kindle was launched.

In November 2009, Barnes & Noble debuted its Nook, available in Walmart and Best Buy.

Then, in April 2010, Apple introduced the iPad.

Although the Nook of Barnes &Noble was less popular than the Kindle, it competed well in the e-reader industry and supported strong e-book sales. Borders did not.

Borders Group also failed to take the competition seriously, contributing to its downfall.

They couldn’t develop a unique selling proposition since they provided the same products and services as everyone else.

The risk of substitution of the whole business model was very high; eBooks were replacing not only books but changing their whole value chain.

In 2006, Amazon’s CEO, Gregory Josefowicz, stated that the company was a “mild player” in the book industry while Borders was not worried about its growth.

Borders Group didn’t take the competitive forces reshaping the market seriously, and as a result, it was unable to keep up with its competitors.

Many companies became fatalities of the internet boom because they did not see users comfortable with the new technology in their own homes.

Borders did not expect customers to read and order most of their books online anytime in the near future.

They didn’t identify the real job to be done.

That was a real integration of online and offline channels to ensure users access books anytime and anywhere. The retail experience is still relevant but as an extension of the whole experience — one of the reasons why bookstores still exist.

Simultaneously, Barnes & Noble and others like Amazon and Apple started selling paperback and e-versions online with a credit card’s virtual swipe.

They jumped the game with their reading gadgets, which gave the user a book-like experience while also owning several books on one device.

The Borders Group was slow to react to changes in customer needs. Meanwhile, Borders grew its liabilities in about 400 stores and more than 10,000 employees.

They eventually filed for bankruptcy in 2011, 40 years after opening their first store in 1971.

Barnes & Noble bought the reader database from Borders for a whopping $13.9 million.

Borders opened numerous shops despite modest revenues, including several outside of the United States.

The firm cited a lack of expansion funds as one of the causes of its bankruptcy in February 2011.

In addition, it said that it had signed too many 15- to 20-year leases, making it more difficult for unprofitable sites. And there were a lot of them.

All of those large stores’ claims turned out to be incorrect. The Internet is far more efficient at providing a wide variety of books.

In terms of overhead, the shops were generally too big and costly.

Furthermore, they struggled to see how the value chain was streaming by its competitors and delivering the promises of accessibility and availability, including Amazon and other retailers.

“The very large assortment size was an advantage early on before Amazon. However, by its very nature, the ‘internet’ was better at quickly and efficiently connecting customers with obscure titles and bringing the ‘long tail’ to market.

Thus, competing on assortment size was especially vulnerable to Internet retailing, and Borders suffered disproportionately as the ‘long tail’ customers abandoned them.” said one Border’s former director of merchandise planning.

The Borders Group’s business model was far too inflexible.

They could not modify their business model in response to changing market circumstances.

As a result, there was a decline in innovation.

In the early 2000s, it generated hundreds of millions of dollars in CDs and DVDs and new areas in its shops. In 2006, music and video sales accounted for around one in five dollars in revenue for the firm.

However, the same conditions causing booksellers to fail also hurt video stores and record shops. In the mid-to-late 1990s, when iTunes, Netflix, and file-sharing networks became widespread, revenue plummeted like a stone.

Borders also failed to generate meaningful additional income through coffee shops or alcohol sales, the savior of many a bookstore.

6. Missing the value of disruptive technologies

The chain’s failure, caused by several strategic blunders, can largely be attributed to its refusal to leverage new technologies that revolutionized the book business.

The Borders Group was unable to keep up with the development of technology, particularly e-commerce growth.

As a result, they didn’t understand how to transform their business.

It put them at a disadvantage from the start, and they could never catch up.

Amazon.com began selling books over the Internet in the early 2000s and undercut Borders’ prices, putting the chain at risk. Initially, the company dismissed it, but Amazon already controlled more than 20% of the book market by 2011.

The book industry was disrupted by new technologies, which the Borders Group failed to address. As a result, sales plummeted when the company could not compete with Amazon and Barnes & Noble.

7. Being afraid to make changes and innovate

Borders Group’s failure is also attributed to the fact that it neglected to adapt and improve.

The demise of the Borders Group was due to a lack of innovation, and facing that disruption was coming, which resulted in it being unable to compete with more agile competitors.

In the early 2000s, Barnes & Noble began closing stores and reducing personnel as book sales fell. However, it did not take any measures to address the problem’s source — the growth of digital books.

Borders Group’s failure provides several important lessons for businesses, including understanding how disruption works and the effect of internal and external factors working together described in my book ‘Unsettled Disruption.’

Lack of understanding of disruptive technologies, failure to adapt to changing customer needs, and an inflexible business model.

In addition, companies should take the competition seriously and be willing to make changes when necessary.

Finally, businesses should always listen to their customers.

However, as it stands, the company’s failure is a warning to other businesses about what not to do. Conversely, companies that successfully embrace disruptive innovation can often reap the benefits.

You could place the blame on the Internet for Borders’ failure.

Regardless of what you’re selling, retail is becoming increasingly difficult.

Other businesses, however, we’re ahead of the curve in terms of disruption.

👉 This blog is part of the new disruption series inspired by my book Unsettled Disruption: Step-by-Step Guide for Harnessing the Evolving Path of Purpose-Driven Innovation.

Sign up for my newsletter and get insights on circular economy and disruptive innovation.

Seven Surprising Lessons From How Blockbuster Failed To Handled Disruption